When musicians think of fundraising for our recording projects, crowd funding is often the first port of call for many of us.

But I still see musicians getting their fingers burned, leaving cash on the table, or even losing every penny that they worked so hard to raise.

So in this post, I want to tackle the 5 costly mistakes that musicians make when crowd funding – and show you how to avoid them.

Also check out the cool FREE resource I’ve put together for you!

To accompany this post, I have put together a fabulous 5 Step Cheat Sheet entitled Making The Most From Crowd Funding.

It’s at the bottom of this article so make sure you download it, print it out, and stick it up on your wall.

But do you take a good hard look at their terms and conditions before you choose? You need to, because it describes how the platform works. You need to know that stuff – and where’s why.

Some operate what I refer to as an “all or nothing” policy, and it drives me nuts.

An “all or nothing” policy works like this: you set your fundraising target, and you either hit it and get that money – or you don’t and you get a big fat ZERO!!

It’s a total misunderstanding of how projects work. Projects are not all or nothing in that way. They are ideal or cut some corners.

If I ideally need 10k but only raise 7k, that just means I have a less perfect project. But I can still make it happen on that smaller budget, so why cut me to zero.

Can you imagine working for weeks promoting your crowd funding campaign, getting a really exciting amount of money, and ending up with nothing?

I don’t want that to happen to you, so before you choose your platform, make sure they are not one of those with an “all or nothing” policy!

It’s time to check those terms and conditions again, folks!

Because here’s another policy that has me tearing my hair out in frustration – the “shut the gate” policy.

“Shut the gate” results in musicians leaving a ton of cash on the table.

So here’s how it works so you can be sure to avoid it.

You set your fundraising target, and once you hit that target, the whole campaign shuts down and you’re not allowed to collect any more cash!

So to paint a picture of why this makes no sense, let me give you a scenario.

Suddenly, the campaign takes off! You gave yourself 4 weeks to promote and campaign for funds, and yet within the first few days something magical has happened! You’ve hit your target! There’s a massive impetus behind your campaign. Nothing could be more exciting!

You hoped you’d be raising 5k but it’s obvious that you’ll be raising a whole lot more than you thought!!!

Well stop right there. No, you won’t. Because the crowd funding platform sees that you’ve hit the target – and so they stop the campaign. They shut the gate and say “no more money please.”

Your moment of glory has been stopped in its tracks, and all that extra money has been left on the table. Just because of a daft policy.

So again, before you choose your platform, make sure that the fundraising will carry on, even if you hit your target. In fact, a platform that lets you reset your target is even better!

3. Using a platform at all

I understand why people use crowd funding platforms. All the tech is done for you. They’re nice and simple. So, my saying it’s a mistake to use a platform is a little harsh, especially if you’re not that techie.

But I include this because, if you have even the smallest technical knowledge, (or you know someone who does), it really is a very easy task to set up your crowd funding campaign on your own website.

By using a service like Paypal, you can simply copy and paste some code onto a page on your website, and you have some BUY NOW buttons on your website that allow you to crowd fund from there.

It’s really straightforward to do.

Many artists already operate their own websites, or have friends who do it for them.

Yet those same artists use crowd funding platforms for their campaigns when it would be just as easy to set it up themselves.

The benefits of running a crowd funding campaign without a platform are twofold.

First of all, your campaign will drive people to your website, rather than the website of some third party corporation.

Every time someone clicks on a link to get to your crowd funding campaign, they will be visiting your website, where they can do a whole load of other stuff that is good for you – like join your newsletter, check out your gig listings, and more.

When you use a platform, your campaign simply builds the platform’s site. Why work hard to build someone else’s business when that hard work could be building your own profile as a musician?

The second reason is to do with cash. The platforms take a pretty hefty chunk of your money. It’s pretty standard for 15% of your money to be taken from you by the platform.

Why give away such a big chunk of money unless it’s something you genuinely can’t do yourself?

Happily, this is something I see less of these days as musicians are getting more savvy as to how crowd funding works best.

But I do still see it. Only the other day, I saw a musician’s crowd funding campaign making this classic mistake.

They were simply asking for money. That’s it. They described their project, and then simply asked for cash for it.

What you need to do to make your crowd funding campaigns much more powerful is to give something back!

By making an offer to your fans, you entice them to give you more money than they otherwise would.

They could get your album before everyone else. They could get a signed album. You could draw them a picture. Whatever it is, sit down, think about what your fans would love from you, and offer that to them.

You’ll get a load more money than simply putting out the begging bowl.

You’ll also have a better connection with your fans because you’re reaching out to them based on what they want rather than just what you need.

You’re serving them, offering them something that they wouldn’t normally get. They’ll love you for it, and they’ll be enticed into giving you more money.

Have you ever seen a car salesman trying to sell the budget motor to a millionaire?

You’ll notice that when automobile companies produce cars, they don’t just make one car at one price.

They know that making one car at one price will cost them money. Why? Because it limits the amount of cash the superfans can spend.

It’s the same with you. Some of your fans will love you and will want to get as much of your offerings as they can. And some of them will be plain wealthy and so can afford more than the bulk of your fans.

By making just one offer in your crowd funding campaign, you’re ensuring that the wealthy or devoted fans can’t give you as much cash as they want to.

You become that car company making budget cars for millionaires.

Different people have different price points that they are happy to pay. Give them that option by having multiple offers not just one.

Download The FREE Cheat Sheet: Making The Most From Crowd Funding 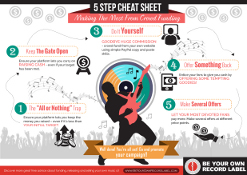 Click the image above to get your FREE Cheat Sheet

The Internet Killed Music - Didn't It?

Get these 5 killer techniques to power up your music career!

No Thanks, I don't want fans or money